Graduated acting at the Russia State Institute of Cinematography in Moscow in 1981 in the class of  Sergei Bondarchuk. He has performed in Pernik Drama Theatre, "Tears and Laughter" Drama Theatre, "Sofia" Drama Theatre, a Little City Theatre Off the Channel. Since 1996, he has been in the troupe of the “Ivan Vazov” National Theatre. He played over sixty roles, among the more significant in the "Ivan Vazov National Theatre are: Bill Starbuck in, “The Rainmaker” by Richard Nash, Professor Higgins in “Pygmalion” by Bernard Shaw, the Actor in "The Lower Depths" by Maxim Gorky, François in "The Dinner for Fools" by Francis Weber, The Contrabasist in "The Double-Bass" by Patrick Zuskind, Malvolio in "Twelfth Night", Gloucester in "King Lear" and Polonius in “Hamlet” by William Shakespeare, Chigolotti in "The Deer King" by Carlo Gozzi , Shpigelski in "A Month in the Country" by Ivan Turgenev, Vladikov in "Hashove" by Ivan Vazov, Borkman in "Yun Gabriel Borkman" and Verle in "The Wild Duck" by Henrik Ibsen, the Captain in "The Father" by August Strindberg, the Commander at “Dom Juan” by Molière, Gaev in “The Cherry Orchard" by A. Chekhov, Azdak in "The Caucasian Chalk Circle" by Bertold Brecht, the Time in "Blue Bird"  by Maurice Maeterlinck, Nikola Geshev in "Geo" by Christo Karastoyanov, Charlie in "Seascape" by Edward Albee, Filio Gologana in "Knight of the Holy Spirit" by Boyan Papazov, Lyman Felt in "The Ride Down Mt. Morgan " by Arthur Miller, Manager in “Teremin” by Peter Zelenka.

He has won three ASKEER awards for the leading actor - in 1998 for Prof. Higgins in "Pygmalion", in 2001 for Contrabasist in "The Double-Bass", and also IKAR' 2001 for Best male role, awards from the festivals in Blagoevgrad, Vratsa and Shumen, etc.

During this season you can watch Valentin Ganev in the performances " The Double- Bass ", "Hashove", "Dom Juan", "One Flew over the Cuckoo's Nest", "The Cherry Orchard", "Knight of  the Holy Spirit", " The Ride Down Mt. Morgan ", "The Wild Duck", "Teremin". 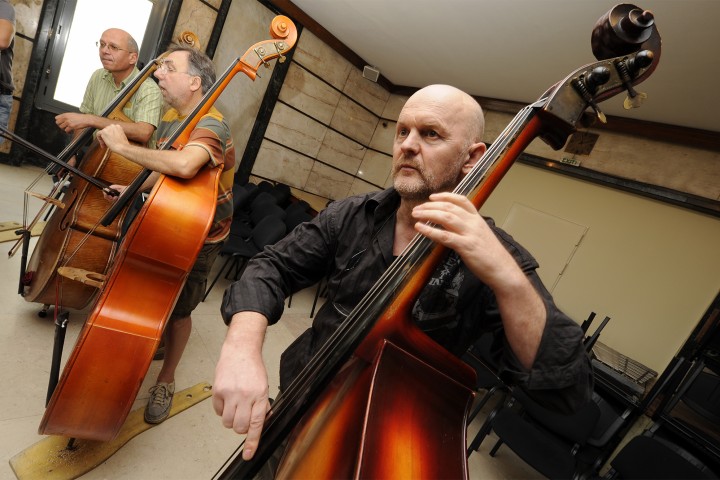